Life
Franz Xaver Messerschmidt was born in Bavaria, Germany, into a family craftsmen and accomplished his apprenticeship in Graz and Munich with his sculptor uncles Johann Baptist and Phillipp Jacob Straub. In 1755 he enrolled at the Academy of Fine Arts in Vienna, directed at that time by the royal painter Marteen van Meytens. Under his patronage Franz Xaver Messerschmidt was commissioned his first relevant work for the Arsenal: a series of bronze busts portraying Empress Maria Theresia and her consort Francis I.
On his return to Vienna, after a short study visit in Rome in 1765, Messerschmidt resumed his work as a sculptor for the royal court and created the portraits of some important scholars and academics from Vienna. These works convey a strong neoclassical vein, in their strict frontal setting, as well as in the subtle tendency to abstraction and in the absence of unnecessary decorative elements.

In 1769 he was appointed as Adjunct Professor at the Vienna Academy of Fine Arts. Around 1771 he began to manifest signs of mental instability and, for this reason, in 1774 he lost the post of full professor. Deeply offended, Messerschmidt left Vienna taking with him only some of his works and perhaps the first five “Character Heads”.
After a short stay in Bavaria, where he hoped he would be engaged by the royal court in Munich, in 1777 he settled in Pressburg, now Bratislava (Slovakia). There he resumed working at portraits and carried out, among others, a series of small medallions in alabaster. However, he spent most of his time trying to keep his interior demons under control, pouring the anguished feelings of his disturbed psyche into the series male heads, subsequently referred to as “Character Heads”. He kept working on them obsessively until his death in 1783.

In 1932 a totally new approach to Messerschmidt’s work was introduced by Ernst Kris, who was an art historian and a researcher in Psychoanalysis, with a great interest in Freud’s theories. After analysing his work and biography, Ernst Kris concluded that he suffered from schizophrenia: the “Character Heads” were a consequence of his illness. From then on, Messerschmidt’s popularity increased exponentially and soon blurred Central Europe’s boundaries, making his sculptures among the most sought-after works worldwide.

The sculptures belonging to the same series stand on a base, incorporated into the bust and need no other support. These two, on the contrary are placed on wooden shafts fitted into alabaster pedestals, created probably at a later stage. Scholars have identified them as Variation of The Ultimate Simpleton and Variation of intense odor, according to the titles of two very similar sculptures of the group exhibited in 1793. However, Count Coronini entitled these two heads Man sneezing and Man looking at the sun. 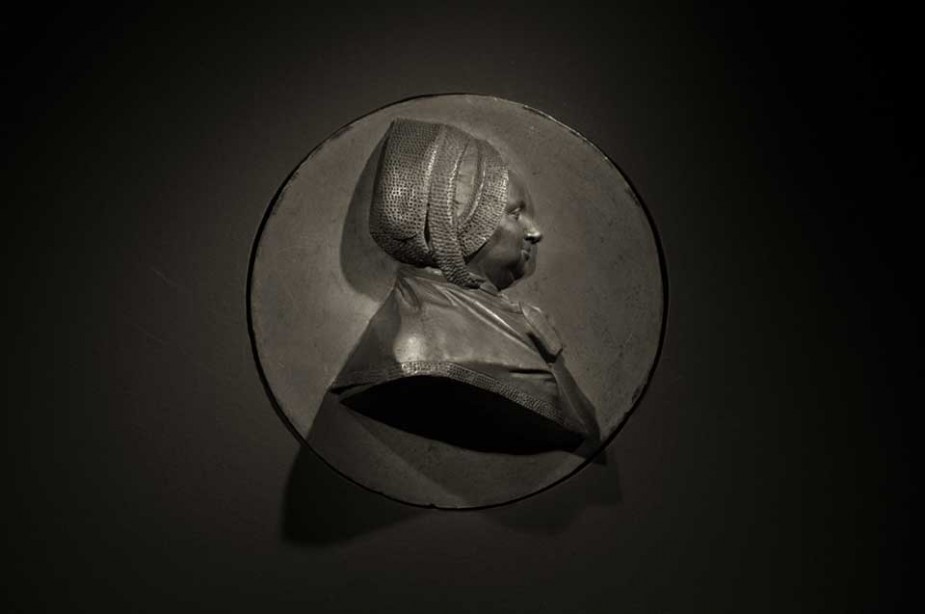 The third work of art by Messerscmidt in the Coronini Foundation, i.e. the small medallion with a female profile in relief, is very likely connected to this circumstance. Even though there is no documentary evidence, it probably belonged to the Palffy Dauns as well and, after Eleonora’s death in 1947, the Coroninis may have acquired it together with other belongings of the Princess. In Bratislava Messerschmidt realized a lot of alabaster medallions like this, recalling ancient medals and following the typical Neoclassical vein, but the Coronini’s medallion is the only one cast in a metal alloy, a material very similar to the one he used for the heads.